Two days ago, I reckoned with my own death. Not in a hypothetical, philosophical sense, either. The most real, tangible sense imaginable. And it was one of the most holy, humbling, and exhilarating things I’ve ever experienced. Now today wasn’t the first time I’ve given mortality a good long look in the eye. I’ve had a few close brushes with hypothermia, been in a few wrecks, nearly flipped a car, and been in some situations with some unsavory people where if a few factors had been different, things could have gone very badly.

But today was different. I was slackpacking the fourteen mile stretch over mighty Cheoah Bald, the last big mountain before I hit the Smokies. It’s a vertical climb of nearly 4,000 feet in seven miles, straight out of the Nantahala River Gorge. Huge thunderheads had been building over the mountains all morning, and I left the NOC under an intermittent drizzle. My hope was that I could make it up over the top of Cheoah before the majority of the storms hit, and weather the worst of it at Sassafras Gap Shelter on the other side before pushing on. And for a while, it looked like I might be able to do it.
This attitude was the single factor that led to the greatest mistake of the day. Instead of hanging out at a lower, safer altitude, I decided to push on, slowly clawing my way up the steep ridge. Three quarters of the way up, there’s a spot called the Jump-Up, a rocky projection of granite jutting out of the trees into open sky. I shot out of the hole in the trees just in time to hear the first thunderclap. I’ve seen more spectacular sights in my life, but I can’t recall any of them at the moment. Gilt-edged ridges a mile high sliced the sky like whetted copper knives weathered with a green patina of trees. The Nantahala roared on in its wild, breathless plunge through the gorge. The first row of ridgelines was clear as if it had been five feet from my face, although it was probably a mile away. All the other ridges were obscured behind a curtain of torrential rain, being poured out of anvil-head clouds so high that their tops were flattened by the rotation of the earth itself. Millions of volts of electricity ripped the sky apart, arcing between the clouds and down to the earth in a near-constant stream of light. I was witnessing a full-blown mountain thunderstorm. I’d seen one a few days before from the top of Rocky Bald, and I felt moved enough by it to post a picture of it. But that storm was an afternoon sprinkle compared to this one. This was the power and the glory. This was the almighty fist of God Himself slamming down on the Nantahala River Gorge. This was the Ancient of Days, Lord of all heaven and all the earth, making Himself felt.

A red-tailed hawk wheeled and banked a thousand feet below me, a crimson speck buoyed by the updrafts violently raking the mountainside. The winds howled to perhaps fifty miles per hour, whipping and picking at my jacket and blowing mist in my face. I stood and stared. And then I bowed down on one knee, praising, soaking in this display of God’s fearsome power on display. The clouds moved towards me inexorably, inescapable and without an ounce of mercy or care for me at all.
It was time to move, and move quickly.
I was already too exposed on my thin, rocky ridge to gain anything by going downhill, considering that’s the direction the storm was coming from anyway. There was nowhere to go but up. The winds continued to howl even harder, and the thunder grew ever louder. Then the rain hit me, so immediately and so violently that I could barely keep walking forward. I could hardly see through the walls of water coming down around me. As I continued to climb the ever-more-exposed ridge, covered only in short, scrubby oaks and sparse thickets of head-high laurels and rhododendrons, the lightning began to strike ever closer. I could hear the split-second progression of click-*flash*-BOOOOOOOOM, feel the shockwave in my chest, and feel the earth shake through my feet. Energy tore apart the air, and I swear I felt my body tingle with electricity. For a moment I began to panic. There was absolutely nothing I could do. Running downhill would put me in the worst of the storm’s path, as the updrafts heaved it up the mountainside. At any rate, it would be a long way downhill to safety. There were no good places to hunker down. I could only keep moving uphill and hope that the mountain’s peak would stall the storm long enough for me to get over the top to shelter.
But then I realized – there was absolutely nothing I could do. I took control of my breathing, slowing it down to a steady in-and-out. And then I prayed. Just a simple Father, I trust you. Your will be done. I recited a few lines from psalms I knew. And just like that, the panic went away. And like Forrest Gump’s Lieutenant Dan in the hurricane, I began to laugh out loud. The thunder rolled harder and the lightning coursed through the treetops around me, and in all my days, I swear I have never felt so alive.

I breathed the wet air deeply, hyper-focused on the sound of every raindrop, the feel of every root and rock beneath my boots. Raw adrenaline pumped through every vein and capillary, and my whole body tingled with life, from my core out to my fingertips. I smiled, beaming from ear to ear, praising God for this display of His power. This was the kind of experience that can’t be bought and can’t be planned. A moment wild, rare, and irreplaceable. This was why I came out here. In another twenty minutes, I’d made it over the top of the mountain and out of this hellacious storm. The sun came out, kinder and warmer than I’ve ever felt, beneath the bluest sky I’ve ever seen. I began to be able to count seconds between the flash of the lightning and the crack of the thunder, until eventually, I didn’t hear it at all. It was over.
If I have a totally uneventful trip from now until Maine, I’ll be happy. The harder death bears down on you, the more alive you feel, and I can safely say that the mortal veil has never brushed me more closely. It’s a moment I’ll remember as one of my favorites until my dying day.
I, like most American Christians, had a hard time grasping the idea of fear of God. I don’t have a hard time with it anymore. I get it now. Proverbs 9:10 says “The fear of the Lord is the beginning of wisdom,” but how few of us really take that verse to heart, and grasp the concept of a fear of God? It isn’t popular in modern churches to talk about fearing God, and on the secular side of things, most of us live such safe, protected existences that we’ve never had to reckon death or danger close at hand, so the idea of genuine reverential fear of anything is difficult to understand.
Fear generally has a negative connotation, and in pretty much any other circumstance, I would agree. Fear is a killer of dreams, a spark of paranoia that ends relationships, a shivering in the heart that arrests action and drives away hope. But a holy fear, one that is built on the realization of awesome, terrifying, righteous power that far exceeds us and leads to respect, repentance, and obedience – is beautiful.
I also have a greater understanding of the depth of the Native American reverence for nature, because nature is a lot scarier up close. When you’re at the mercy of a great and terrible power so much larger than yourself that can end your life with one misstep, you’re going to treat it with the respect it deserves. Imagine the power behind the power now, if you will. A thunderstorm is a sight to behold, but it’s just a fractured reflection of the One who created it.

I’m still learning so much out here. This week’s lessons have been in gratitude and humility. I’ve already inflected some about humility, because it’s hard to keep an ego out here. Not just because of the raw power of nature, but because of the grandeur.
The woods are big out here. Even though it’s not that far from home, it’s a different world. The mountains are higher, the valleys are deeper, the rivers are faster, and the trees are gigantic. Old-growth poplars and tupelos a yard across, growing in steep, moist coves too deep in the mountains to be logged, stand like a moss-covered colonnade alongside the trail, towering into the sky, ninety feet to the first limb. Spring is fully alive, even on the highest ridges. The eager tulip poplars and crabapples have already burst into green, with the more staid, steady oaks and hickories slowly following suit. At the lower altitudes, it almost looks like summer.
I’ve been climbing at least one five-thousand-foot-plus mountain per day since I entered North Carolina, and soon I’ll be in Great Smoky Mountains National Park, home of Clingmans Dome, the highest point on the trail. It’s a rare day that I don’t get at least one fifty mile view. Postcard-quality scenery is my daily reality.
All of it combines to make one feel very, very small. You don’t get to dictate the terms out here. The land does, and you adapt accordingly. And although it’s humbling, it’s not necessarily humiliating. It can be, like when I slipped on a muddy rock and butt-slid for a few yards down the back side of Cheoah Bald in the rain, cussing mightily and grabbing at tree roots to steady myself. But usually, it’s a positive, calming, meditative experience, coming as a slow realization that I’m not the biggest thing out here and this world doesn’t revolve around me, and that’s okay.
My mindset towards gratitude has taken a massive shift as well. It takes so little to make my day now. Beautiful weather, an unexpectedly nice view, a good conversation with a fellow hiker, or a quality tent site can all be high-water marks of a day. Things I took for granted, like hot meals and contact from friends back home, are now deeply cherished.
The day before my thunderstorm experience, a good friend and colleague of mine from back home, Joe Satterfield, commented on a picture I posted. (Ironically, it was of another thunderstorm… although that one was a baby compared to the one I got caught in.) He asked when I was going to be coming through the Nantahala Outdoor Center campus in Bryson City, as he and his family were driving down from Gatlinburg through the Smokies that morning. I was actually hiking towards the NOC at that exact moment, so a lunch meeting worked out perfectly. 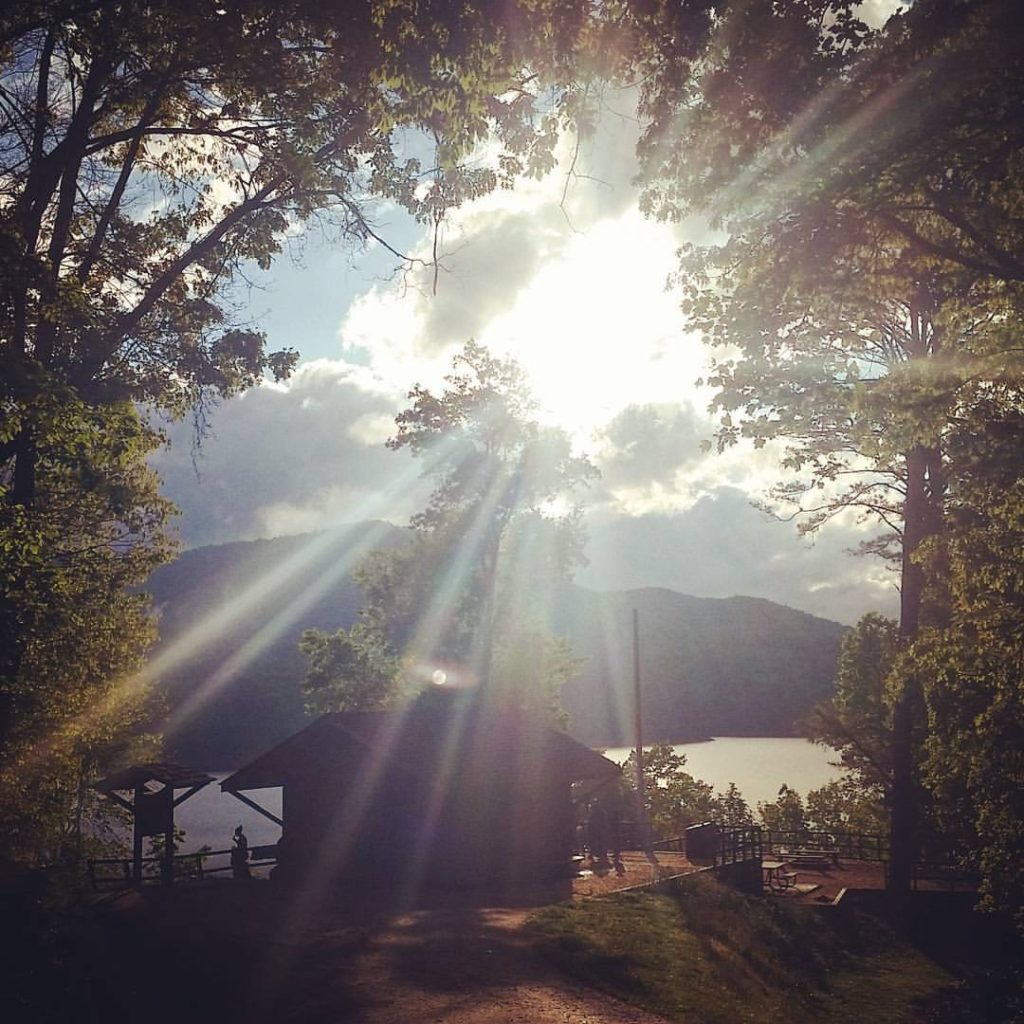 Donate to my GoFundMe at https://www.gofundme.com/25kjt5jg